Marching to Her Own Beat-Score Short Reads

Marching to Her Own Beat

Drumming is usually considered to be a field that is dominated by men in general. Regardless of the type of music, a woman sitting on a drum stool and grooving away isn’t a common sight. However, if you take a closer look, you will find out that the drumming community and industry aren’t as skewed towards men as one might assume.

There are quite a few women who are helming the drum kit and infecting us with their incredible grooves. Surprisingly enough, female drummers are more common in testosterone-dripping genres of music such as rock and heavy metal. On this International Women’s Day, we will take a look at two fabulous women drummers from India who are marching to their own beats.

Siddhi Shah was drawn to playing drums after consuming a steady diet of rock and metal music during her teenage years. She also draws inspiration from dance and art, all of which helped set her up on the path of becoming a drummer.

Sapna Desai’s affinity towards drumming runs in her genes. Her father is a drummer and she was always attracted to the majestic charm of a drum set. Surprisingly enough, her parents were against her drumming pursuit. But just like her sense of time and tempo, she stayed strong and never wavered.

Beat 2: How did they learn the craft?

Siddhi Shah started teaching herself through YouTube videos and started taking drum lessons locally. After that, she obtained a Diploma in Drumming and Music Performance through The Swarnabhoomi Academy of Music, Chennai. She has continued to work on her skills since then and has cleared Trinity & Rockschool Grade 8 and Music Theory Grade 5 with distinctions.

Sapna Desai’s father never taught her drums and she has mastered the craft by herself. Through her journey, she was guided by famous Indian drummers such as Gino Banks, Jai Rowkavi, Ranjit Barot, and Atur Son.

Beat 3: Who inspired them?

Music is a field of life where inspiration is the key to success and growth. Siddhi Shah looks up to Jojo Mayer for his super crispy micro beats, Anika Nilles for her mastery in odd time signatures & subdivisions, Sarah Thawer for her pure authenticity, musicality and chop skills.

When it comes to Sapna Desai, aside from the Indian drummers who guided her, she also looks up to international artists like Jose Pasillas, Virgil Donati, and Vinnie Colaiuta.

Beat 4: How are they carving their niche?

Siddhi Shah isn’t just satisfied with playing drums for a band, she wants to acquire the skills needed to become a one woman band. She loves the fact that she can inspire so many people through her exploits behind the drum kit. She has been able to inspire a host of young girls and their families through her work and she intends to continue doing so.

Sapna Desai really enjoys breaking stereotypes and perceptions of a female drummer that people might have in their minds. Through this, she stays cognizant of the fact that being a drummer is a physically demanding endeavour. There’s a lot of heavy lifting involved and the kit needs to be assembled and disassembled regularly.

However, even through the grit and grind, she genuinely enjoys changing people’s perceptions of what a solid drummer should look like. Regardless of one’s gender, the amount of effort, practice, and dedication required stays the same. She loves the wave of confusion that passes through the crowd when it sees a woman setting up the drum kit and sound checking and not the usual big dude.

Regardless of what you think of women drummers, their rhythm is gonna get you. 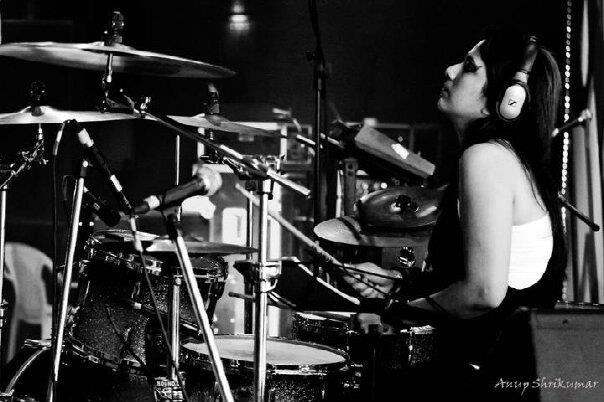