Ritnika Nayan: On her latest book Indie 101 and more!

Ritnika Nayan, Founder of Music Gets me High and Author of the recent book Indie 101 talks to us about the idea behind writing the book, her take on the music scene in India, upcoming projects and more.

How did the idea of writing a book come about? Is there a story behind it?

Over the years, I’ve been approached by a lot of artists and industry professionals regarding some of the topics covered in the book. After being asked the same questions over and over again, I realized that there was no place where an artist could go to find all the information needed to survive the music market in India. So I decided to jot down what I knew and the idea of the book grew from there.

How has the response been so far from the people in the industry who have read your book?

So far it’s been great and I feel very blessed. The artists especially appreciate it. In fact, I am running out of physical copies except for what’s on Amazon. (Digital versions though will always be available via our website)

If there is a specific thing you would like people to take away from reading your book, what would it be and why?

I want people to understand that the music industry is just like any  business and once they learn the tools of the trade, they can navigate it successfully to their advantage.

Was there a specific protocol you had in mind while picking the people who you have covered in the book?

It started off with people I had access to and people I admired. Then, it was mainly whoever was keen on being in the book. I wrote to a lot of people, some didn’t respond or want to be a part of this. The ones that did, were included. I wanted to cover as many people from various avenues to give a broad picture of the industry.

You have been in the Indie scene for the last 17 odd years. Do you think there has been a considerable change in the scene ever since you started out?

There have been a lot of changes. We have so many festivals now and people are taking music seriously as a career option. When I first started here, there were hardly any managers/promoters… That has since increased. Sure we still have a long way to go… But we are getting there slowly.

What were the challenges you faced when you started MGMH?

Honestly, it was mainly adjusting to the Indian way of doing things. I had only worked in the States /London before that. And also networking. I didn’t know anyone in the Indian industry, so I literally had to start from ground up and meet people and establish myself.

What changes would you like to see in the current music scene in India?

I feel we still need to be more professional. Payments cycles and deliveries need to be sorted and we need proper music business education degrees so we have better and knowledgeable professionals in the industry.

What’s your take on the Indie music scene in our country? Do you think there is ever a possibility for Indie artists to gain as much limelight as mainstream artists?

Yes there is. But you have to be realistic – you have to give a little to get a little. We live in a country that predominantly listens to mainstream music. So if you want more people to listen to you then you will have to give them something they are open to. I feel success is relative. You can go the Nucleya route and do Bollywood and non-Bollywood stuff or you can go the Sky Harbor  and The Ska Vengers route. Both avenues are successful in my book.

At the moment, I am working on a support group for musicians called good vibrations. It’s a place for everyone to get music industry advice plus we also offer emotional and mental health support to whoever needs it. As I feel that’s really needed in our industry. I am also trying to figure out a proper certification  course for music business in India.
You can buy the book online: http://amzn.to/2y61gua 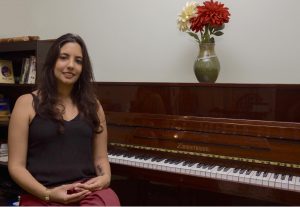