What is life without the Blues?

Johnny Winter, the tattooed Grammy winning genius, once drawled, “I think the Blues will always be around. People need it.”

And the Blues shall always be there. Vain are those who believe that Blues are mostly for the sad and despondent. For those who actually feel the Blues, it’s the happiest thing in the world. There are the Blues for love, Blues for the bun in the oven, Blues for rainy nights, Blues for regret, Blues for the pretty stranger in the bar. Blues is the life you live, just in a charming scale.

The mighty Mahindra Blues festival approaches just when we needed some more Blues. Known for roping in larger than life artists, who promise the most unforgettable experience of your lives, the festival is going to be something we’d talk about for many days and posts to come. Here’s the schedule for all ye cool cats bitten by the Blues bug:

Overdrive is a 3 piece Blues Rock band with a set ranging from old school Blues to a modern sound and their hard-hitting renditions of some Blues/Rock anthems.

Henry Saint-Clair Fredericks, who goes by the name Taj Mahal, is an American Grammy Award winning Blues musician. A self-taught singer-songwriter and film composer who plays the guitar, banjo and harmonica, among a billion other things, Taj Mahal has done much to reshape the definition and scope of Blues music over the course of his almost 50 year career by fusing it with non-traditional forms, including sounds from the Caribbean, Africa and the South Pacific.

The MBF breakfast session with the artists

Sink your teeth into some succulent croissants, muffins, and other mouthwatering delights. If that doesn’t work for your appetite, the conversation with some highly talented artists will.

Sunday Blues brunch with Something Relevant

Have a feel-good brunch with Mumbai’s resident feel good band. Apart from being extremely good musicians, they’re a funny bunch with cool hats. Seriously. We were bowled over, when we witnessed them play at ICT grounds last weekend. In case you haven’t seen this already, check ’em out again:

The word ‘feel’ gets thrown around a lot in the music industry. People spend their live looking for the much talked about feel. But little do they know that all they needed to do was to catch Warren Mendonsa in his element. He is known for his instantly recognizable, distinctive guitar sound & playing, incorporating immaculate phrasing and abandoning traditional, flashy “guitar hero” techniques, in favour of composing memorable melodies and playing with feel.

Here’s our own video to give you a glimpse of what to expect:

They say that they’re the ‘Band that Reignited the Blues in India’! Catch them live to know just why Rudy and Tips are so worthy of praise.

Ana Popovic?, is a Serbian blues guitarist and singer. This stunning blues guitar diva learned guitar at the age of 15, a journey that began with her father. They’d dance to songs by Howlin’ Wolf, Robert Johnson, Stevie Ray Vaughan, Buddy Guy and Albert King, not knowing that a couple of decades later, she’d be playing with some of them. 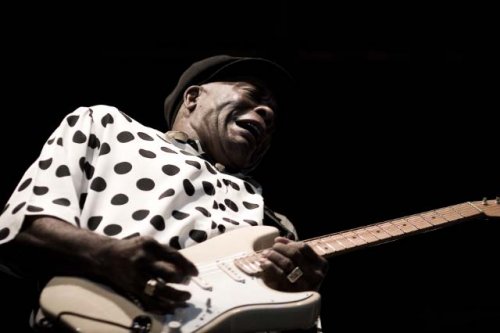 Jimi Hendrix once declared that, “Heaven is lying at Buddy Guy’s feet while listening to him play guitar” There is no dull moment, when Buddy Guy takes the stage. One moment he’d be serenading you with a sweet guitar solo, while the next moment he’d jolt you out of your seat by a sudden tense twist in the piece. He is what every Blues guitarist aspires to be. Witness this legend live with Robert Randolph, a virtuoso on the pedal steel guitar.

Of Fancy maps and spoonfeeding: TL;DR