Made In India, The Album That Made Alisha Chinai The ‘Queen Of Indipop’: Score Indie Classics – Score Short Reads

The opening frames of the video for Made In India features an animated book that narrates the story of a princess known as Alisha. Little did she know that this track (and its accompanying album of the same name) would grant her the status of the Queen of the then-nascent Indipop scene.

While non-film music had already been an underground phenomenon with occasional airplay, Chinais album fared so well in terms of sales, that its success could be comparable to Hindi film music. One can simply argue that Made In India shaped not just Chinai’s career but also the entire Indian independent pop scene.

Modern-day audiences might think of Made In India as her debut. Even though the song continues to be the most well-known entry in her discography, the pop star had been in the industry for quite some time. In fact, Made In India happens to be her eighth studio album! She had marked her musical debut with the Platinum hit Jadoo, following it with future albums and occasional Bollywood playback credits.

She was already gathering gradual fame with some critics equating her to foreign pop stars like Madonna. Hence, two of her albums were christened Madonna (1989) and Alisha-Madonna of India (1992).

It was in 1995 that Made In India broke all records and managed to make Alisha China a household name, a feat that was hardly achievable for indie artists in those times. The album managed to received multi-platinum certification and sold over 5,00,000 copies. The unique selling point was, of course, the titular track. Probably, the second-most popular track from the album would be Lover Girl.

The tracks might differ in sound but all of them seemed to carry an upbeat theme, filled with lyrics that would probably be categorised today as ‘bubblegum pop’. But underneath the peppy concept of her easygoing songs was a woman musing about her varied romantic and sensual interests.

Around that time, film music had a tendency to be overly dramatic in its notions of unrequited love. Chinai’s songs, on the other hand, represented a more casual form of love that didn’t require over-the-top sacrifices. It was a simpler sense of romance that probably resonated with young audiences of the time. In Made In India, she marvels at how she craves a heart that is ‘made in India’ while in Lover Girl, she simply tells her partner that she would offer her heart if he offers her his own.

The former’s popularity also rose, thanks to a majestic music video that featured model/actor Milind Soman who had caught the fancy of the public.

A significant share of the album’s success also goes to Biddu who served as a producer and lyricist to most of the tracks. The UK-based, Indian-origin music producer was already a seasoned veteran by the 90s.

Interestingly, Biddu had written Made In India for Hassan who had retired from music by the 1990s. The producer hoped that his collaborator would mark her comeback with this song but she was fearful of the reactions such a song would generate among her Pakistani fanbase.

And so, Biddu eventually partnered with Alisha Chinai producing an eleven-track album for her with Made In India serving as a lead single. The rest, as they say, is history.

Chinai didn’t release a single album after Made In India but went on to have a stellar stint with Bollywood, winning over new fans with the song Kajra Re while Biddu contributed greatly to launching the careers of Shaan, and Sonu Nigam. However, Made In India continues to be an all-time high point in their trailblazing careers. 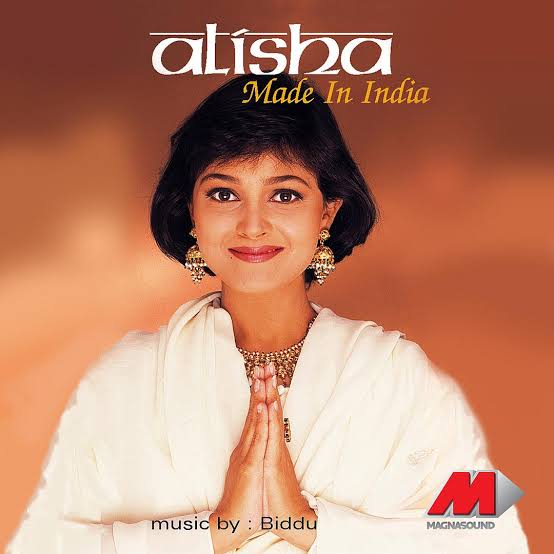