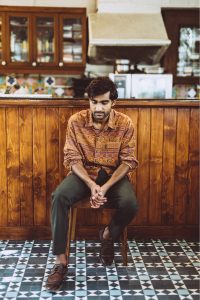 Let’s start this with a story.

Once upon a time, there was a girl called Mei. At 25, Mei was almost completely alone. She had lost love for her family because of childhood emotional abuse. At 23, the man she loved kicked her to the curb after three months, and went on to love another girl. The next man did the same, after two months. Mei let herself like someone one more time, but they weren’t interested. They preferred to be “friends”.

On a rainy evening, Mei was in the subway, returning from a job she tolerated for the salary. She was returning to an empty flat, as she had been for the last four years. Despite everything she told herself and everything she tried, she couldn not help the tears. Mei felt defeated. She felt locked into a life with no love, no family and no hope. She began to think of ways to die.

Before boarding the train, she had set her complete playlist on autoplay. In the midst of debilitating, exhausting emotional agony, she heard something play.

It’s easy to create stories to the tune of Prateek Kuhad’s new album. I like to think of that as his gift to us. The album is shaped around frozen frames involving love. None of it is ordinary, all of it is frequently occuring. The six songs form an incomplete but extremely competent mosaic of the human condition. There’s plenty of hunger, despair and resignation. However, Kuhad seems slightly amused by all of it.

The songs are all addressed to some willowy, almost ineffable lover. Kuhad spins words that yearn for and speculate on a more substantial union. But he is neither piteous nor pathetic. His tone is one of curious observation. He feels the longing, but watches his own feelings as much as he watches his beloved. His music reveals refreshing self-awareness. Expression of love is a conduit to understanding the song within him.

And I have been fighting for you/Open wounds and loose smiles, for you/I could have been another friend /Or I could pretend
-fighter

More often than not, his words seem to be self-reflexive dialogue. One would not amiss to think that he sang these to himself in an empty room for the first time. Whoever the beloved, they are silent and almost inconsequential outside their role as the one Kuhad wrote and sang for. Like all good love poetry, the one being loved is deeply obscured. You feel very little interest in knowing more about them, but would rather spend your time exploring the knick-knacks and turntables comprising the lover’s obsession.

The album is capable of both comfort and sorrow. If you find yourself in one of those half-understood situations where you are struggling to procure love from an unsure candidate, you will be brought to some tears. But you can console yourself if you seek in the music a kindred soul. Think of your own crushed heart, and try to remember that Kuhad has felt enough of that to come out with

do you have a 100 words for me?/cause i have only three/you couldn’t even sing for me/and i keep on writing these songs/over and over/and I keep getting closer, to you
-100 words

Musically, the album is beyond reproach. Balance is Kuhad’s reigning element. His acoustic sensibility is instrumental to his storytelling, and Kuhad is one of the finest storytellers of our time. His tales are unimposing, almost verging on whispers. Their impact is surreptitious. It is hard to predict when his words will catch you by surprise, and be entirely relevant to whatever you are enduring at the moment. His music has the enchanting ability to create space within the listener. It beckons instead of demanding attention. Kuhad is entirely assured that you will come to his music when you need to feel heard and understood. In my opinion, that is enough to keep coming back.