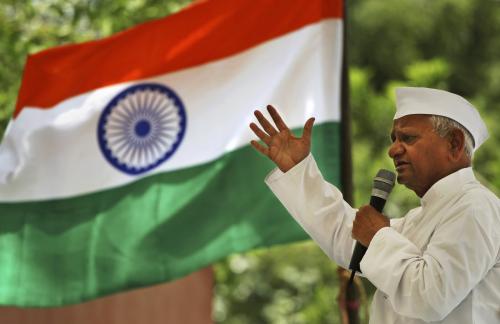 With Anna Hazare shuttling in an out of jail like a crazy ball, the country has been riding the waves of protest music. In respect (and a modicum amount of ridicule) towards our Desi Dylans, we bring to you in an easy to understand five point list format: India’s Protest Music!

Being An Ode to India Protesting the Cancer of Corruption, is sung by Abhaey Singh and Shibani Kashyap.

Its quite nice really, with an interplay of male and female voices ( which according to more than one youtube commenter is sublime.) The jugalbandi style song goes on for an insane six minutes, extolling the virtues of India, and how we are being generally obnoxious and destructive about it. (fie for shame, sir)

It IS quite nice, really.

But with this, one often wonders, who is writing the songs combating the Inflammed Gall Bladder of nepotism, and the Appendicitis of smelly people in public transport?

VOOFA is a hindi rapper dude, who is based in Canada.

This song is an intense rap and breaks in into a ‘hah, hah’ refrain, which sounds similar to an obese man on a treadmill. It is very patriotic and swadeshi and all that, with brutal Angrez-bashing that we so revel in. At one point in the rap, he totally loses it and starts talking about black pride. (Umm. Why? )

Nice if you’re drunk. With patriotism, of course.

The singer is a dude from Patna, and as far is I can tell he seems to be just a dude with a daddyesque moustache who penned an anti-corruption song.

This song, as seen on the CNNIBN newsclip, was used in the protest marches in Patna.

It goes something like, ‘Dil Pukare, Anna Hazare..” sung in a singsong lullaby voice and laments the sorry state of affairs in our country. While it is hard to imagine people getting all worked by by this, one must appreciate the voice of the common man rising up against corruption.

Even if the song puts you to sleep.

This is THE song. If you were to be having a revolution in the Carribbean, mon.

Like we told you before, the song, by Rapper Blaaze is dedicated to Anna Hazare. In the words of the singer himself: “I feel it’s the duty of every citizen to show support in anyway possible. For me, it’s through music and rap. Time for Gandhi is a metaphor for time for peace, time for change, time for the people.”

It’s fresh and quite infectious but the singer’s very calypso vocals make it hard to distinguish anything except the refrain “time for ganday, time for gandaaayee.”

This seems to be the definitive Anna Hazare song. The refrain consists of his name dragged out to beyond any semblance of language.

Another song by a person singing from the heart. The musical composition and the unbearably preachy Bhrashtachar didactism may be rubbish, but the emotion attached to the song is palpable.

This makes it to the top of the list for being the refinement of the genre, a random person so insanely inspired by the movement that he just has to pick up his guitar and sing.

Anna Hazare has been called everything from the reincarnation of Gandhi to a gibbering buffoon, but the man’s ability to polarise the country is undeniable.

What say you, Score readers? Let the comment wars begin!