It isn’t always good to get high on score. Yes? 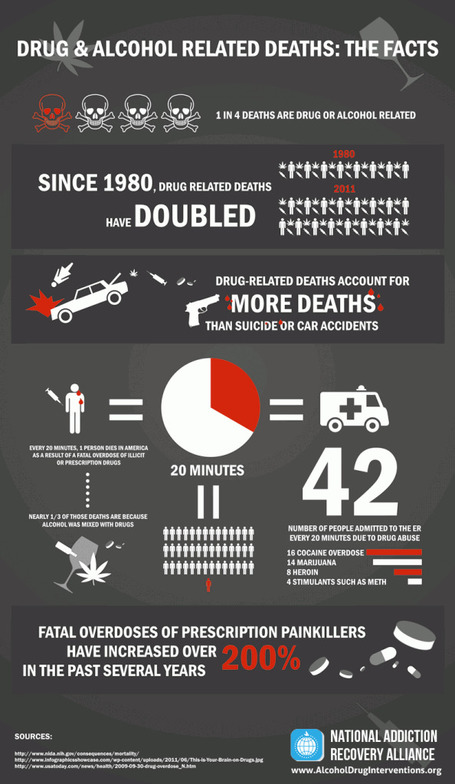 Drug abuse related deaths are on the high, but musicians seem to be more suspetible than the rest. Coincidence or simply hype?

Credit for the the cool infographics: Alcohol and Drug-related deaths.

During the 70’s, a whole new array of drugs were introduced into the international market. The world saw a deviance away from traditional and natural inebriants, and a steering towards artificial, man-made substances.

Today, every 20 minutes, there is a person in America who has been hospitalised due to drug overdoses. This number is radically high, but in no other discipline than music has it been truly abused.

SO, what’s this infatuation with “getting high” that musicians seem to have an endless connection with?

Grapewine has it Justin Bieber smokes Marijuana. It could be clever photoshop or not. Realism is just a photoshop away these days.

Through the years, several talented people have lost out on the way due to drug addiction and dependence. Layne Staley, the acclaimed singer of Alice in Chains was a noted heroin user, and eventually died of it too.

Antony Keidis, singer for the Red Hot Chili Peppers came out with a novel titled Scar Tissue, which was a biography of his experiences and negative trips while suffering from drug addiction.

Scar Tissue: an insight into the addled mind of a drug-addict musician

So in they end, talented or not, an addiction can ruin your career and kill you. Amy Winehouse is a much more recent case-in-point. Janis Joplin, who died on this day, years ago, was reknowned for her soulful, crooning vocals. Even she played her epic and memorable set at Woodstock on a whole cocktail of narcotics and alcohol.

Here’s another infographic on Janis and the rest of the 27 Club!

There you have it! If you are an aspiring musician and wish to maintain your sanity, stay off the dope!!