The Strangest Musical Instruments in the World

It is astounding enough to know that the Hawaiian people have an ancient practice in which a leaf is made to whistle. In other words, they play a leaf much like someone you or someone you know would play a clarinet. However, turns out that there are far more interesting, curious and sometimes strange devices that serve as instruments. Take a peek at the list below to get your jaw dropping.

Hydraulophone : Invented by Steve Mann, this device creates music by contact with water or other fluids. Fundamentally, you press with your fingers on narrow jets on water spurting out of the usually curve shaped device and it results in sound. Know the technicalities of the contraption and you’ll be able to generate actual songs – all out of water and your fingers. Far-fetched, I agree. But entirely real, I assure you. ( Youtube for proof ). 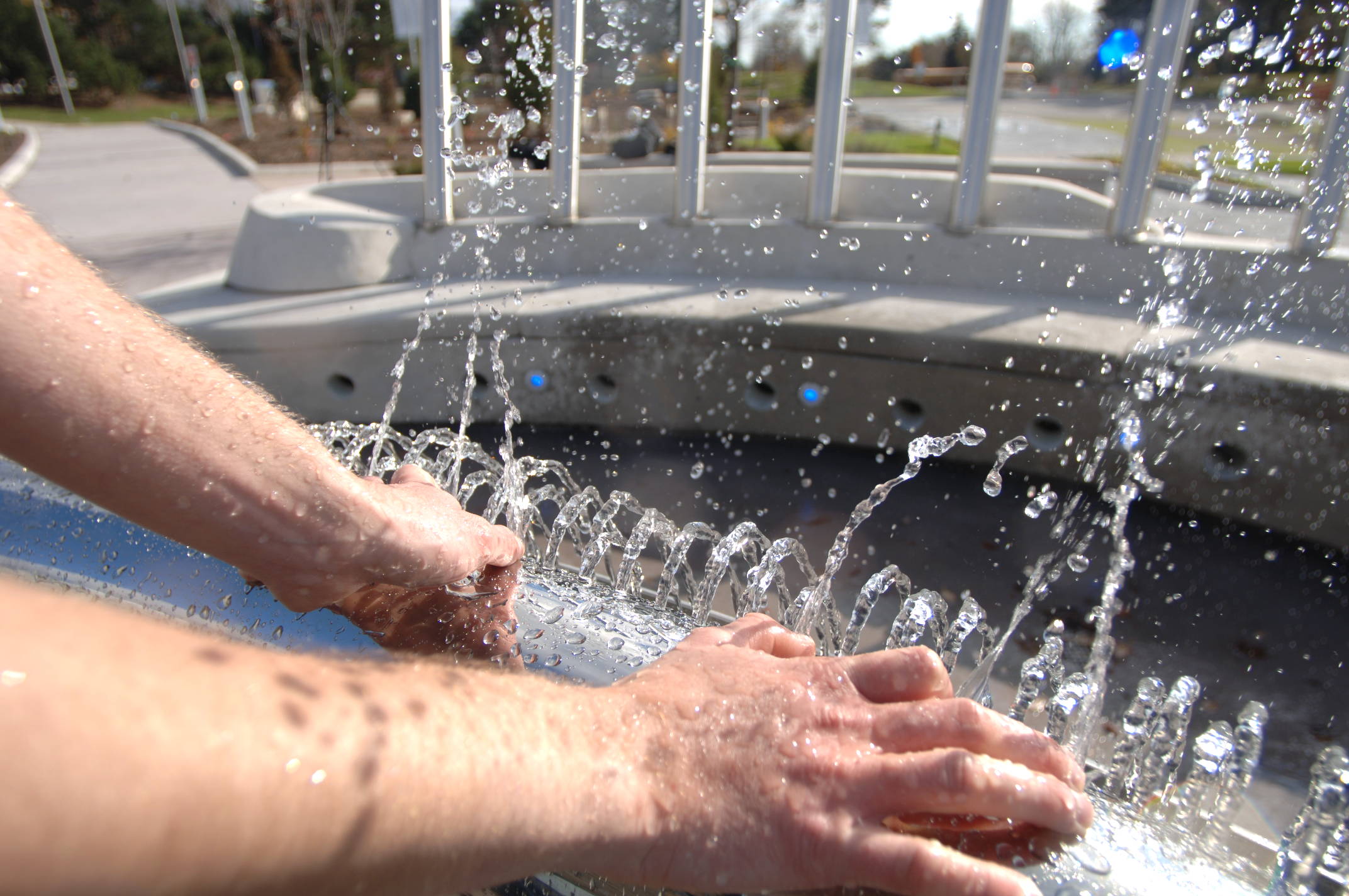 Theremin :  Named after its creator, Leon Theremin, this instrument stands out for the strangest of reasons – you play it without touching it. The thereminist waves their hands in air (in very specific ways, though to the uninitiated, it might look like they are trying to summon a demon), causing  an eerie tone to be spun out of nothing ( or so it appears ). Two antennas and the thereminist’s hands’ distance from each determined the quality and pitch of the sound. The distance from one antenna determines frequency (pitch), and the distance from the other controls amplitude (volume). Higher notes are played by moving the hand closer to the pitch antenna. Louder notes are played by moving the hand away from the volume antenna.

The theremin has been featured  in soundtracks of movies like Miklós Rózsa‘s Spellbound, The Lost Weekend, and Bernard Herrmann‘s The Day the Earth Stood Still, theme songs for television shows such as Midsomer Murders. Its sound is exceptionally suited for eerie, ominous or anticipatory scenarios ( Dr. Hannibal Lecter playing the thing in the 1999 eponymous novel ). 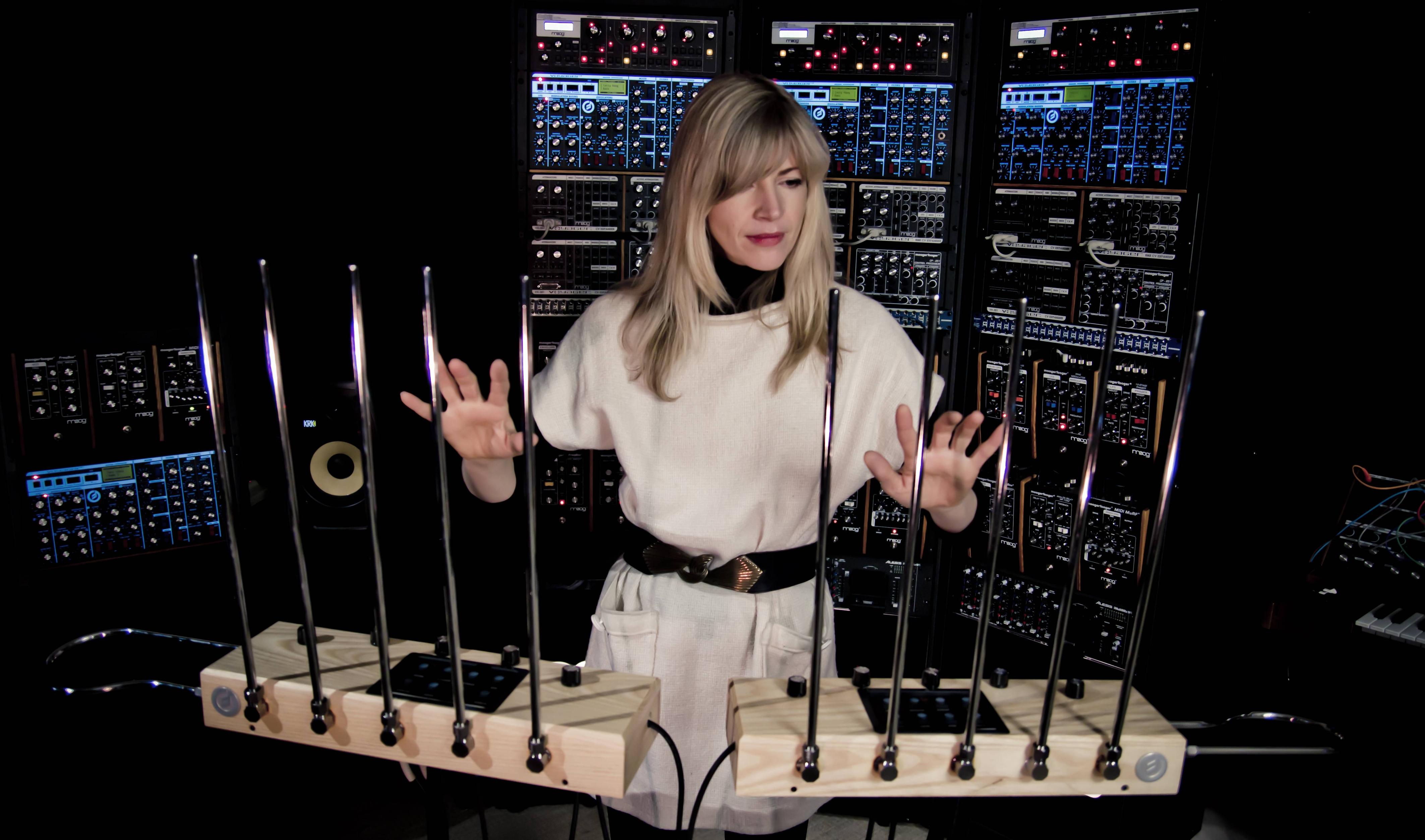 The 12 Neck Guitar : Yes, that is a thing. Japanese artist Yoshihiko Satoh combines mass-produced guitars in order to “unleash the energy residing in their function and shape”. That has led to him turning them into these incredible sculptures that could easily replace paintings on walls. They might be a tad difficult to play, but no doubt that if it could be managed, the sounds they produce would be unmatched. One should possibly try to get Cheap Trick’s Rick Nielson to try one of these, given that his instrument is  a custom 1981 Hamer that includes a 12 string, a 6 string, a 6 string with a whammy, another 6 string and a fretless 6 string. Five necks. Can twelve be all that difficult for him? 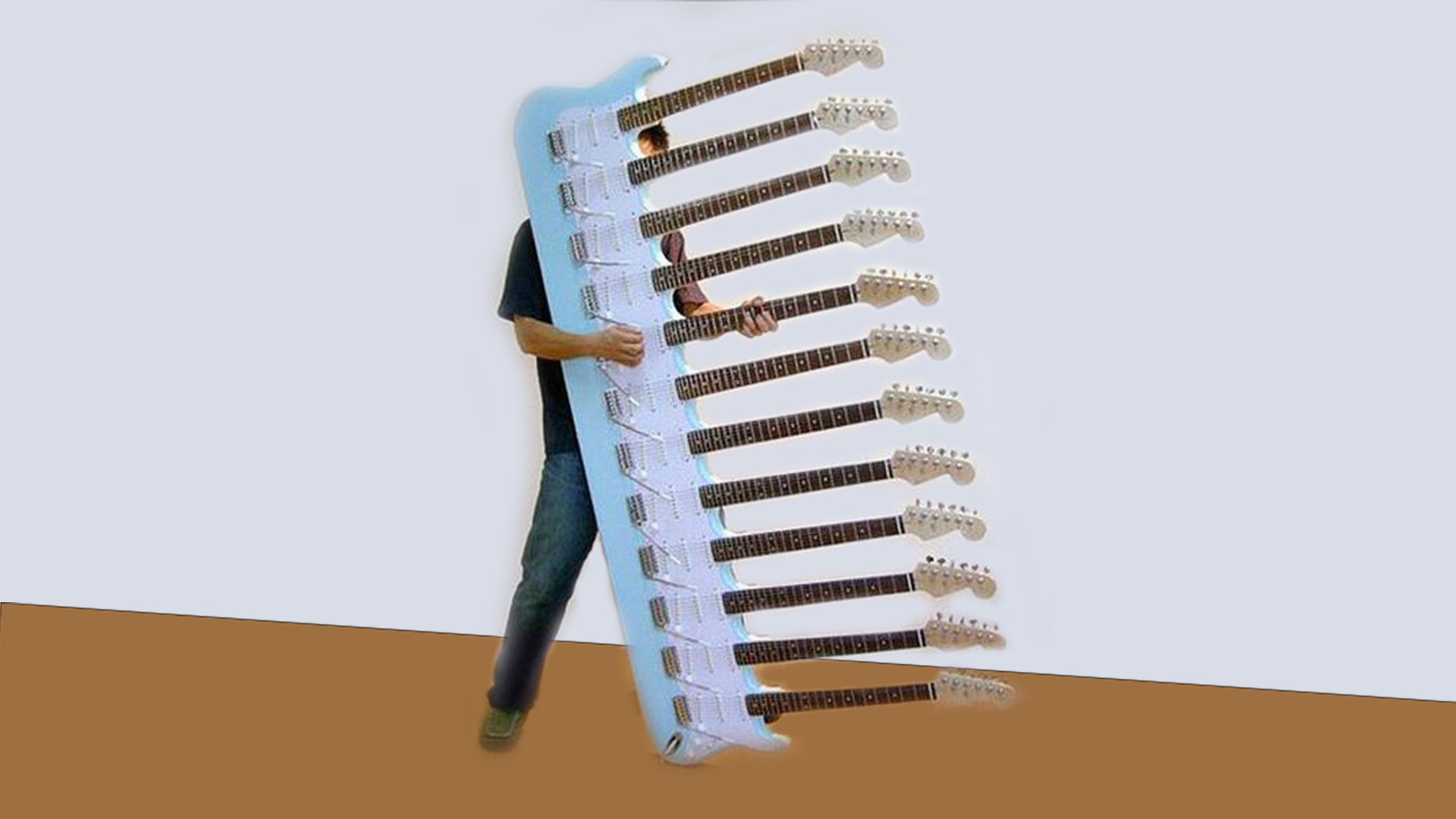 The Vegetable Orchestra : An entire musical group from Austria that plays their music on instruments made out of fresh vegetables.  The ensemble consists of musicians, visual artists, architects, designers, media artists, writers and sound poets who play with pumpkins, peppers, carrots, turnips, broccoli and a very healthy selection of organic produce. The Orchestra is far from a gimmick, having been in operation for seventeen years. The musicians have to be not only skilled at being able to extract sound out of greens, but also at picking the right vegetables from the market before every performance ( unlike other musicians’ their instruments tend to rot ), shape them appropriately so that they function as an instrument and practise for hours. Try catching up with their performances on Youtube, and if someone ever tells you that its not polite to play with your food, show it to them too. 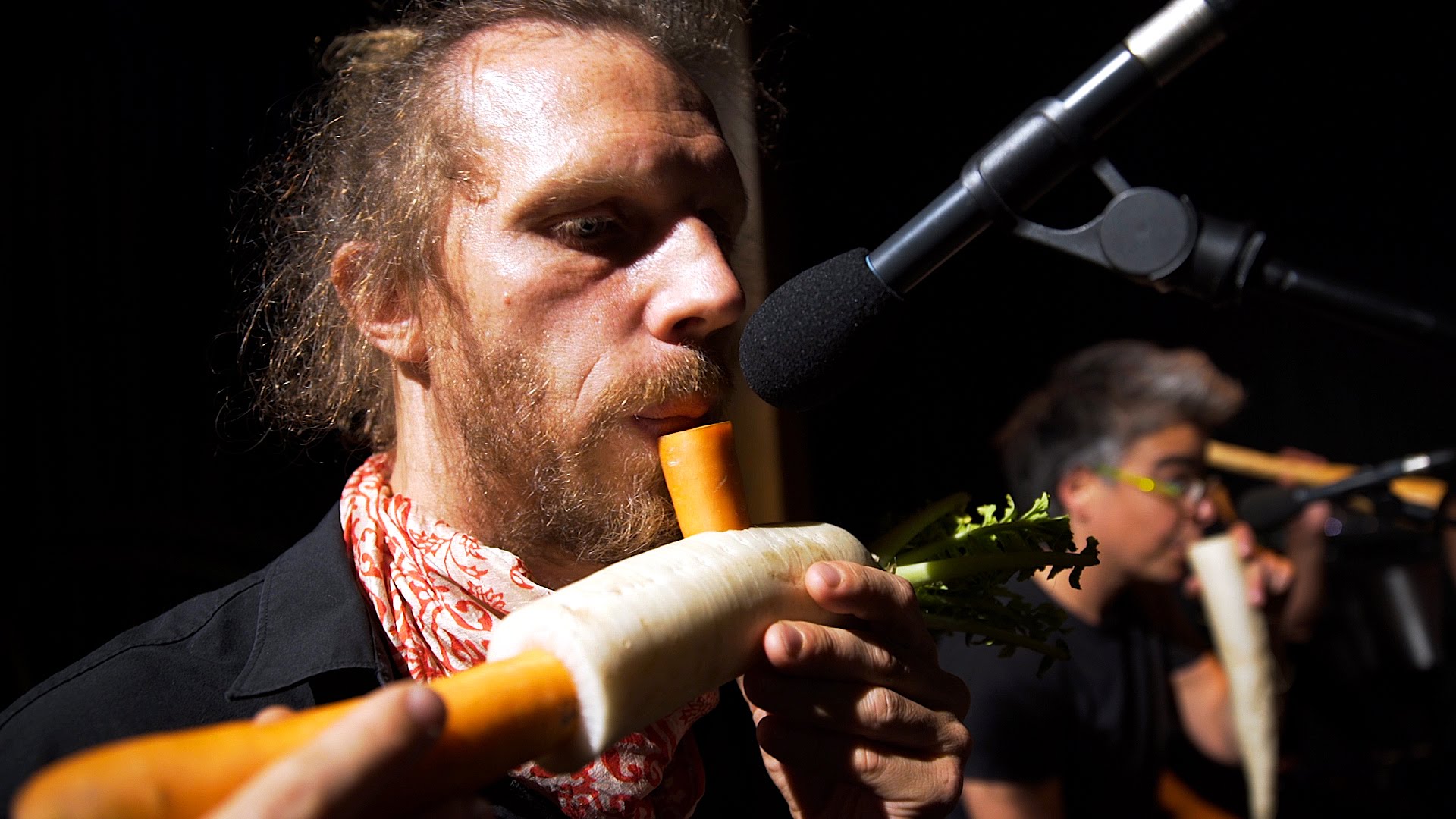 The Great Stalacpipe Organ : Wikipedia says “The Great Stalacpipe Organ is an electrically actuated lithophone located in Luray Caverns, Virginia, USA. It is operated by a custom console that produces the tapping of ancient stalactites of varying sizes with solenoid-actuated rubber mallets in order to produce tones.” It is an organ set inside a cave where instead of pipes, it is wired to soft rubber mallets that are able to strike the stalactites of varying size, shape and density. Essentially, when this instrument is played, it utilises the entire geological structure into its strings and cymbals. Try imagining that – playing a note and having the earth reverberate it back to you. 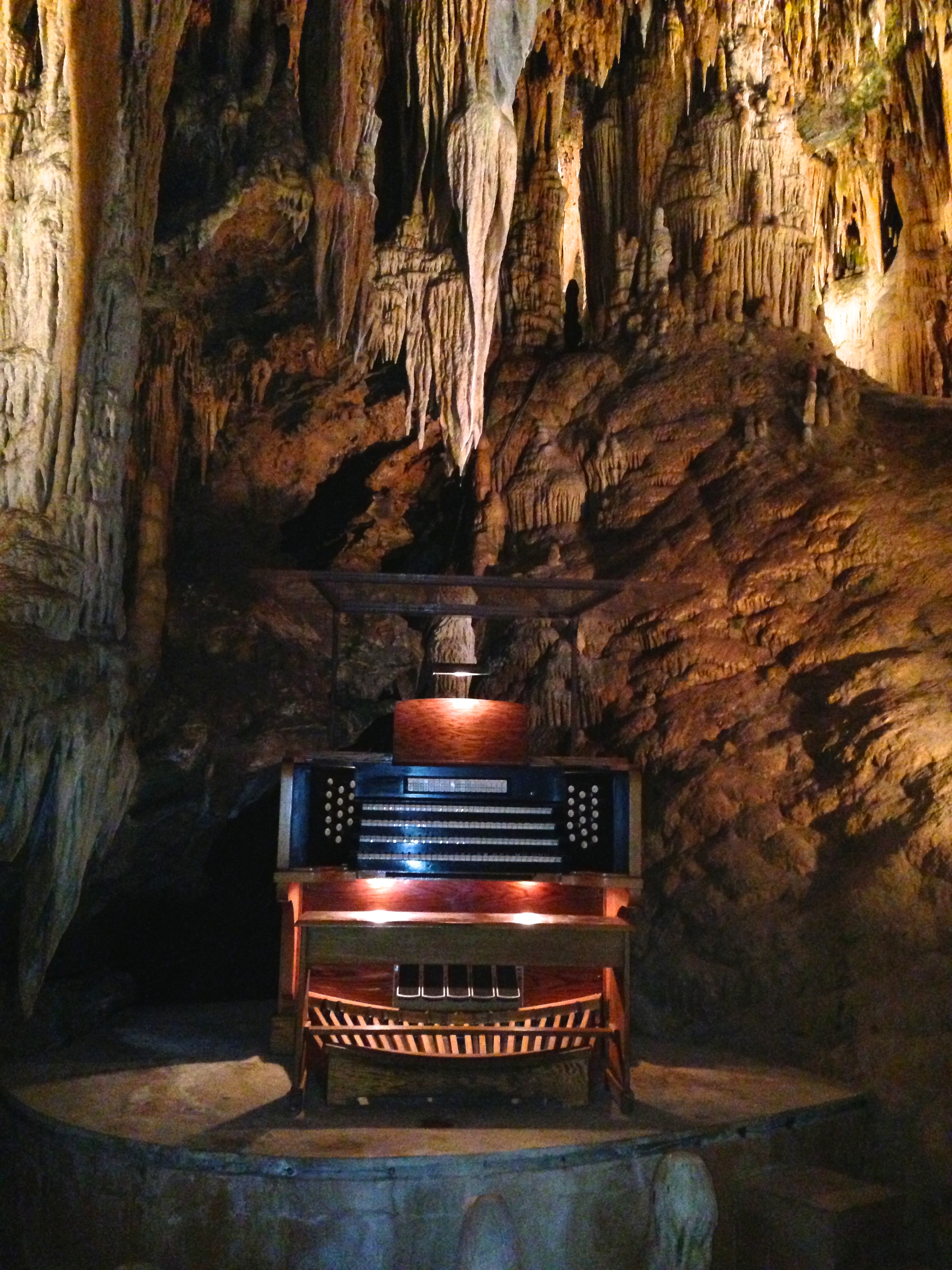 Morske Orgulje ( Sea Organ ) : In another bid to turn the earth into a musical instrument, architect Nikola Basic devised a way to make the sea sing. On the surface, it looks like a series of marble steps  dropping into the Adriatic Sea. Underneath, a number of narrow channels connect to thirty five organ pipes. Each set of steps contains within it five organ pipes and is tuned to a different chord. Wind and waves stimulate passage of air through the pipes and onto the steps, leading to the emergence of sounds.

Unsurprisingly, people flock to the sea organ’s location ( Zadar, Croatia ) to catch a whiff of these sounds describes as haunting and harrowing in equal measure. 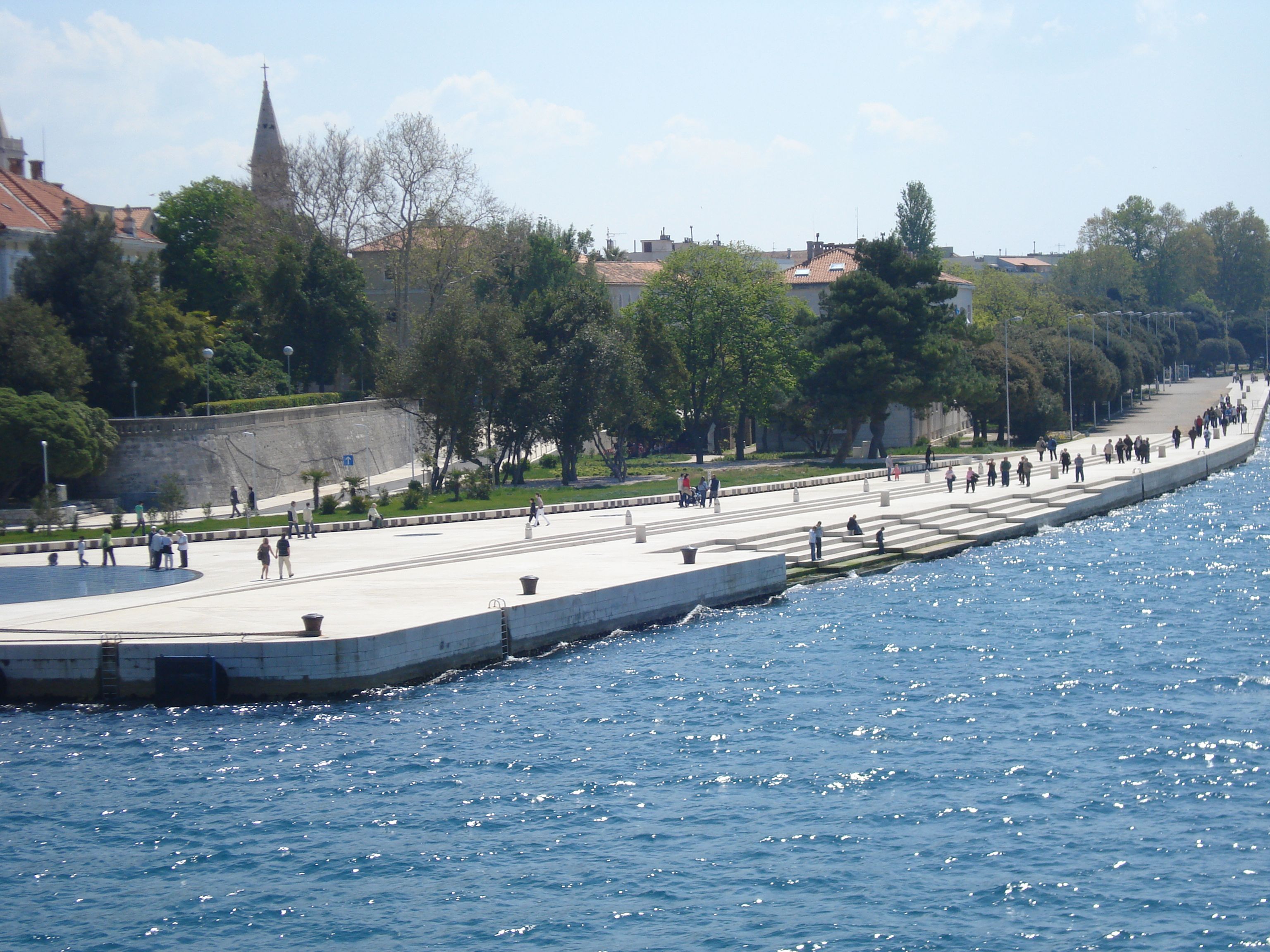 The Singing Ringing Tree : A musical sculpture near Burnley designed by the architects Tonkin Liu. Composed out of stacked pipes of various lengths which are aligned and structured to lean into the directions of the wind, however it may prevail. When the wind flows through the differently shaped pipes, it is transformed into different chords. Anyone sitting under the tree will hear a different songs, predicated upon the direction of the wind relative to their position.

In 2007, The tree won an award for architectural excellence from the Royal Institute of British Architects. No surprises there.

Pyrophone Organ : Another curious device that utilises wind to create tone, the pyrophone organ uses combustion to create explosive compositions.  Powered by propane gas supplied to the base of glass resonant chambers which is set aflame by a flame generator, the instruments utilises the detonations and its creation of hydrogen flames that are channelled by the pipes and manipulated to generate specific tone and timbre. The variations are caused in accordance with the diameter and heights of the resonant chambers.

While the original model of construction from the 19th century is no longer followed, the early designs have been modified to work with smaller proportions. These days, pyrophones are quite amenable to being transported and much safer to use on account of resonant chambers being cooled by liquid nitrogen between notes. 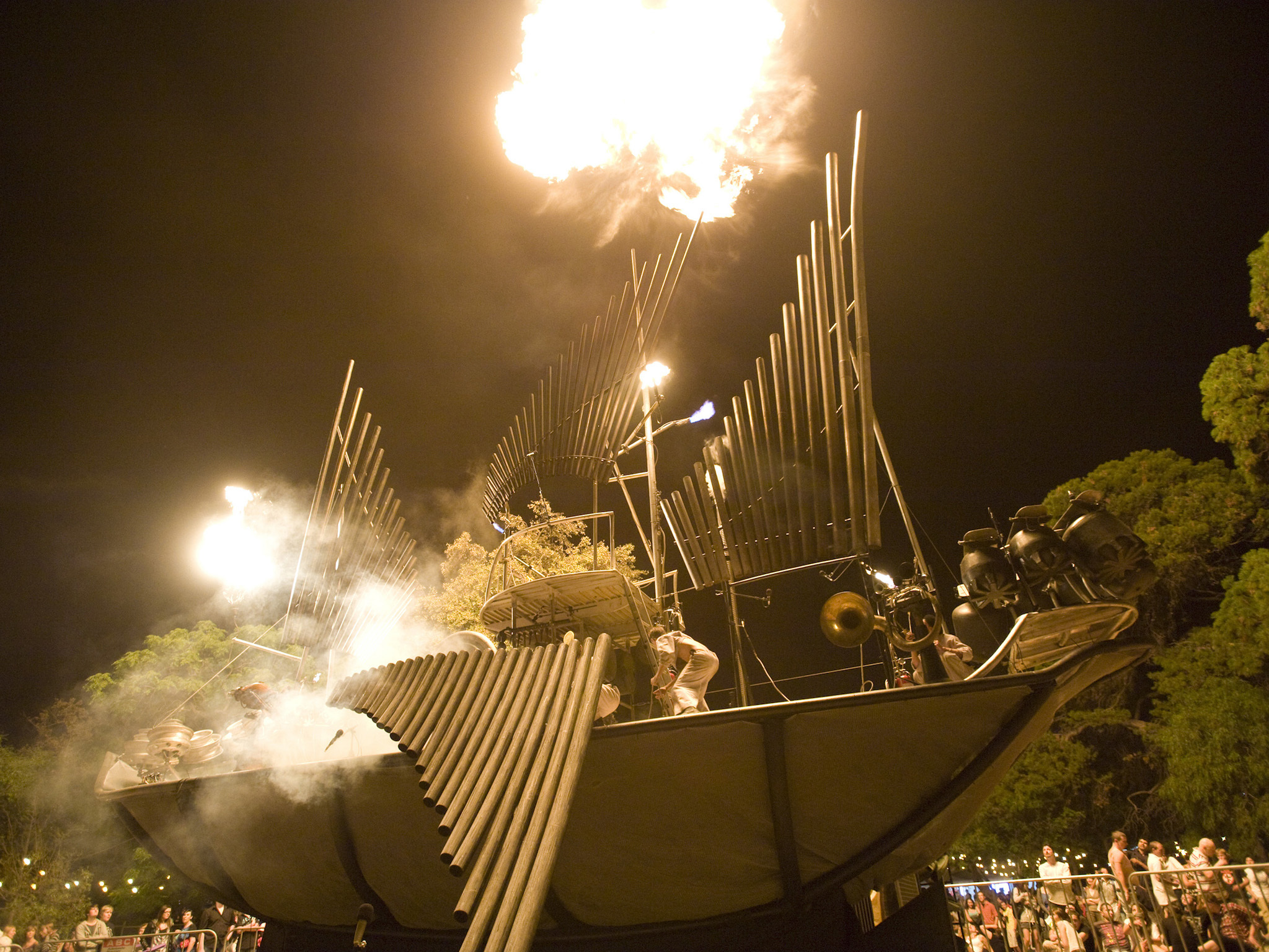 Loophonium : One day Royal Liverpool Philharmonic Orchestra’s principal flautist  Fritz Spiegl. woke up and decided that he would combine the euphonium with a lavatory pan. No, I did not make that up. The Loophonium was invented to be played at a concert of the Royal Liverpool Philharmonic Orchestra on April Fools’ Day 1960. In 2003, the original item designed by Spiegl was auctioned by Sotheby’s for 500 – 1000 pounds.

While I’m choosing to end the list here, the number of bizzare instrumentation that musicians, engineers and inventors have pursued number by the hundreds. There’s the pipe organ sculpted out of ice and the Earth harp which is the world’s largest stringed instrument which has the resonating chamber on one side of a valley and the strings stretched out nearly 1,000 ft to the other side. Feel free to look further and I promise you, you will revel in the magnificent oddities of our minds.

It’s J-Hope’s universe and we are fellow travellers on an adventurous journey with him. We are drawn into this world because of its colour, fervour

A Lovecraftian Love Affair: Why Does Metal Love HP Lovecraft?

Why Does Metal Love HP Lovecraft? Heavy Metal is one of the last genres of music that most outsiders would consider to be literary. In

How to Stack Your Distortion Pedals Like a Boss?- Score Music Tech

If you’ve used more than one distortion pedal at a time, you’ve “stacked” them. Based on your pedals and their respective settings, you might have

How to Use Multi-Effect Processors with Keyboards and Synths: Score Music Tech

How to Use Multi-Effect Processors with Keyboards and Synths As the 21st century dawned upon us, a lot of keyboard workstations and synthesizers started featuring

Nithya Rajendran is a dual Indian Classical vocalist in Hindustani and Carnatic music with over 3 decades training. She is founder and curator of Music

Harman Professional Solutions has recently launched its JBL Commercial series in India, This is a new audio brand of the company that is aimed at