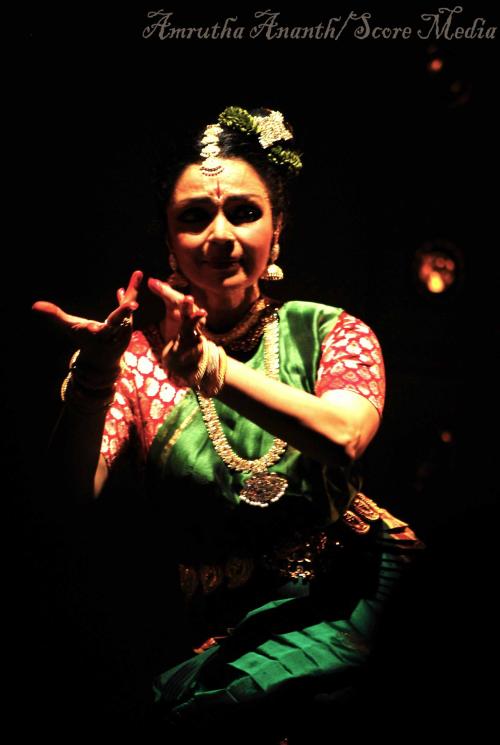 Anita Ratnam and Pritha Ratnam extrapolated the essence of Andal with their tribute performance “Andal Andal” in memory of their mother Leela Ratnam. This performance repainted memories of the sisters dancing together on stage after Pritha’s 15 years break.

The choreography which portrayed Andal’s totally immersed devotional love for God was brought out poetically in seven frames. One needs to applaud the research work (By Anita Ratnam & Revathy Sankkaran) done to come up with this production.

The life of Andal is remarkable in its romantic simplicity and Anita and Pritha did not fail to hallmark it with grace and passion.

Starting with frame 1 “Impatient”, the scene depicting the beginning of Margazhi, the eagerness to awaken the Lord Andal’s love was portrayed by the evergreen Thiruppaavai – “Margazhi Thingal” followed by “Maale Mannivanna” and “Ongi Ulagalandha”. 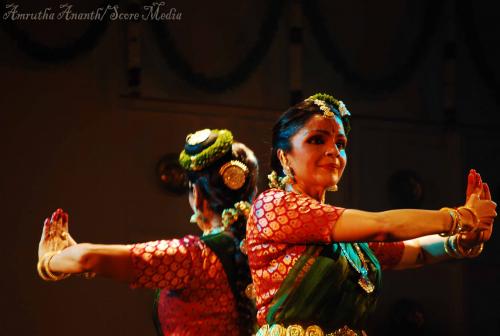 The concept of “Andal Andal”- where the inner Andal is conflicted, depressed, fiery, spirited,was represented by Anita ;the outer one where she is obedient, calm and dutiful was recreated by Pritha. The sacred chants rendered by Pradeep Chakravarthy added in bringing out the essence of emotional involvement, closely linked with anger while Sharanya Krishnan with her silky voice, added colour to Andal’s outer self vacillated the audience .


Solo movements and moments of togetherness woven aesthetically brought out various hues and shades of the protagonist. The intimacy brought out in Andal’s dreamy nature, the depiction of the peacock with “Mayile” echoing in a swaying tune  in the background and the rain adding a blush to Andal was indeed a noteworthy sequence in the third frame depicting “Obsession”. 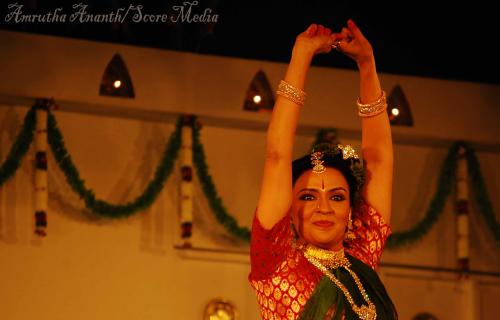 “Envy”, “Hope”, “Promise”, being other frames of this production was brought out as a transcendental reality ,depicting Andal’s love as a mere consciousness. “Paarkadale” was yet again a laudable sequence where the sisters presented extreme co-ordination. Moreover a change from the traditional rhythmic patterns with an addition of a tribal tenor in the percussion by NK Kesavan was a creditable music ensemble.

“Lament” and “Bliss” constituenting  the sixth and seven frames respectively was soulful with Andal’s plea to her lover, “Maadhava”, “Govinda”, “Keshava”, “Vaikunta” to accept her. The choice of the Revathy raagam was wise with timely bell strokes in the background completed the frame beautifully. 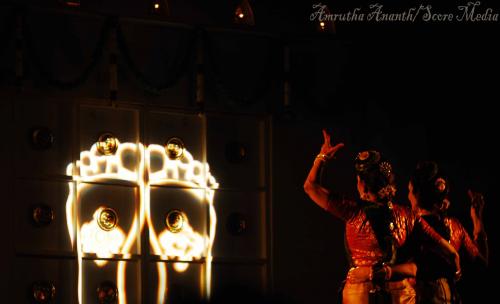 Subtle lighting variations according to the moods portrayed by the character highlighted and definitely added a streak of enchantment to the performance. The “Paadam” of the Lord appearing on stage was a surprise traversing us altogether to reach “Ranga”(the Lord) .


In total, it was an ecstatic experience, flowed out in the form of portrayal of beautiful poetry by the duo. The performance advocated surrendering to the Lord in utter devotion or Bhakthi as the simple means of attaining the Lord’s love was well appreciated by the august audience.

Amrutha Ananth is a student of Manipal University. She has been a student of classical music and dance for several years and nurtures a passion for writing & photography.