Kalpana Patowary had a chat with us about her musical journey! 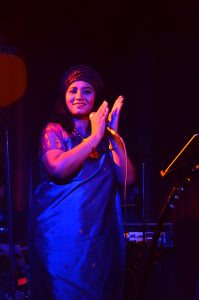 Her loyal service to Bhojpuri folk music has rightly earned her the sobriquet ‘Bhojpuri Queen’, despite being born out of that strong cowbelt region. Blessed with an enviable high-octave range, Kalpana Patowary is a rare female folk voice to reckon with in current-day context. Disciple of the legendary Hindustani classical vocalist Ustad Gulam Mustafa Khan, this dynamic Assamese girl is also trained in the rich folk traditions of Kamrupiya and Goalporiya lokgeet by her mentor-father Sri Bipin Patowary, who is also an accomplished folk singer. Having collaborated with ace percussionist Trilok Gurtu and formed the happening folk-fusion band Dhruv Voyage alongwith Dhruv Ghanekar, a co-founder of the path-breaking state-of-the art live performance venue — Blue Frog, this amazingly talented artiste has already many feathers in her cap as a musician-achiever.

How come you know so many languages and comfortably sing in them?

Well, at first let me express my gratitude to the Lord for giving me a golden opportunity to survey this planet Earth as an artiste and celebrate its wealth of variety and originality. Frankly, I do not know all the 30 provincial vernaculars I have sung in. But I just love to chase the phonetics of every single tongue and boli. You know, every lingo has its own vibrations. Hence, I feel so much blessed to have been born in a country that speaks so many different languages and dialects. In Mumbai, diction was a little problem for me at the outset. But by God’s grace, I proved my credentials in the Bhojpuri language over time which is even more problem-prone. And that’s what I presume has worked in my favour.

Where did you pick up so many folk forms from?

Looking at the prism of art today, I could clearly gauge one thing that many people love to pick up things solely for the use of gimmicks within their scope of work. However, my situation was different. Interestingly, I got my share of name and fame from an unfamiliar direction — from the heartlands of Uttar Pradesh, Bihar, Jharkhand and there was a lot of travelling involved in the process, getting to meet and mingle with a multitude of people from dissimilar backgrounds and notions. I also got bestowed with the tag ‘Bhojpuri Queen’ which is a big title on my shoulder. Gradually, I was exhorted to follow the route of different folklores and songs from birth till death, in other words, the Sanskara geets. Today it has become my sanskriti to live and breathe like this (smiles), plucking and acquiring different folk philosophies of the human race. It gave me some sleepless nights, yet at the same time, fetched me enough money and loads of accolades that one dreams of. I invested time and efforts to seek out indigenous information at each step, plus there was this perpetual hunger to learn more and work towards not only the artform, but also respect its culture, the history and its ancient roots behind, because they are all there for a reason.

What is the current status of independent folk artistes in India? Do you think their voices often get lost and gagged in the crowd of mainstream film tracks and band-music?

See, it’s easier said than done, because it’s never a cakewalk to find your way into the hearts of women in villages, into the private corners of their rustic homes as well as their warm kitchens. In India in a nutshell, there is no definitive concept of independent music. Here, everything is synonymous with movies and its scores. Music to me is a medium to emote through songs. Today, people want to watch big stars in choreographed songs and a lot of emphasis is laid upon their visual appeal rather than the sound aspect. If a video is devoid of a well-known face, it will certainly not be promoted as much it is duly desired or expected. So, independent artistes have less freedom to be vocal about some vexing issues here.

But hopefully, things slowly seem on the upswing now as folk or regional music has attained international standards and so are its serving folk artistes today. We need to understand that a global sensation like Shakira is phenomenally popular with her native colloquial speech worldwide and not any common lingua franca.

Does India host many folk festivals and platforms to patronize and push the genre on a pan-national level and export the same on a world-wide scale?

Yes, music festivals like Nh7 Weekender, Rajasthan International Folk Festivals are growing size and strength around in India with every passing season and performing folk artists on these stages are certainly getting a good coverage under massive spotlights of recognition. So am quite optimistic about the future which holds signs of promise and potentiality.

Do you advocate experimental work in music or staunchly believe that no format should be tweaked or twisted for posterity’s sake and innovation?

A constant reinvention is the need of the hour. You are always free to speak your mind in indie musical domain but first thing first, that is to put the parent source on record and then opt for fusion in the second phase. Or else, we will lose grips from our original essence forever and forget who we were, who our forefathers were, what our root was and blah blah blah.

You are also breaking away from stereotypes with music by singing Chhaprahiya style of Purvi folk music which was so long a male monopoly. How did you dare that?

I am the first non-Bhojpuri speaking singer who could for the first time present in Bhojpuri music history, an age old tradition of “Khadi Birha” folk to international audiences via avenues like [email protected], Nh7 Weekender and Blue Frog with world-renowned musicians. I am also the first woman to record and sing the Chhaprahiya Purvi style. The day I had decided to give it a go, being a woman I felt challenged by my inner conscience as no woman had ever dared to sing this particular Chhaprahiya form of Purvi folk music as it demands a high-octave range. Without compromising on the conventional and traditional value of Chhaprahiya Purvi, I continued to add interesting innovations. Until I set foot on the scene, Purvi I agree was indeed a male preserve. But today Purvi is known as if I was the one to engender it. The song ‘Devra Tudi Killi’ from my album Pyar Ke Rog Bhayilreleased from the T-Series stable, was an experimentation to record it in a female voice, needing a very high-octave vocal range to render it successfully. Years later, the song becomes history itself.

How did the big Bollywood offer ‘Gandi Baat’ from R..Rajkumar happen?

Begum Jaan is one of your forthcoming works. Talk to us about its music and the ace composer Anu Malik’s magical touches on it.

I am very happy as the song is based on a tapestry of folk elements. Vidya Balan is a much respected actress for me as her performance graph pitchforks her image beyond the confines of a clichéd Bollywood heroine. And Anu Malikji’s signature melodic tunes are there on the playlist. So excitedly looking forward to this one and keeping my fingers crossed!

Any other upcoming endeavours you would like to mention?

Of late, I finished shooting the music video of my recent musical documentation album,Jimo Chhayan — the children of the sun and the moon of the north-eastern India. The album consists of the famous Assamese strains of Bihu folk songs featuring the core of north-east interspersed with different community languages namely, Deuri, Tiwa, Missing, Sonowal etc. Other ambitious non-film projects include Gangasnan — The Legacy of Bhikhari Thakur (Part 2), Labour Pain Songs (Sohar) — how a migrant’s wife delivers her baby, Shikayit — a protest song, Mahout Song — a folk project on Assam’s Goalporiyalokgeet and Uta Desor Palta Katha — a folk fusion album. Among Bollywood assignments, Vidya Balan starrer Begum Jaan and Aamir Khan’s much-anticipated Dangal are waiting in the wings.

Amrit Ramnath is a musician, singer, producer and composer . He is an Indian classical singer who has been exposed to various forms of music.

Anisha AOD – YOU AND I: Score Indie Reviews

Indie-pop artist, Anisha AOD is an upcoming singer-songwriter-pianist in India’s growing English contemporary music market. Her tone is resonant of Dido-meets-Feist with her sensuous voice,

An Indian singer, songwriter and composer, Anirudh Deshmukh is an up-and-coming Indie Musician with immense potential. A writing style with easily relatable lyrics and his

Four phases of the day are explored in one smooth jam of a song that is Rohan Chaudhary’s Days With Her: Score Indie Reviews

If there’s one word to describe Delhi-based folk-pop artist Rohan Chaudhary’s new single Days With Her, that will be smooth. He plays around with a

Globally recognized for the delicate and soothing melodies, the Easy Wanderlings is a musical journal of the band members’ cherished memories about soulful conversations, escapades

Ankur Tewari is a storyteller. He has spent the better part of his life discovering different mediums to share his tales. At times his stories