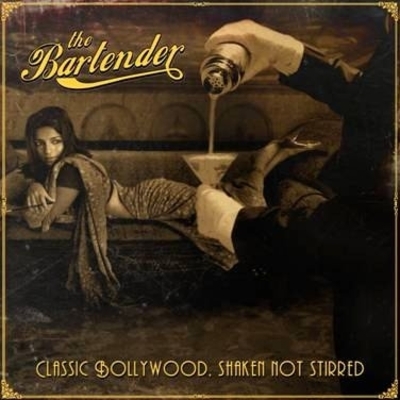 When you have four highly talented gorgeous women singing contemporized versions of the choicest all-time classic Bollywood tracks, you don’t need a real bartender to get inebriated.

A good bartender is one who churns out a subtle YET potent concoction out of an otherwise boring stand-alone liquor, which has the potential to slyly creep into the minutest of crevice of your brain and lower your inhibitions at the most opportune moment.

Similarly, Mikey McCleary & Co.’s live performance of such classic tracks from the album The Bartender: Classic Bollywood – Shaken, Not Stirred hits you unexpectedly. The name itself is intriguing – ‘shaken, not stirred’. Mikey conceptualized this album with the intention of presenting these classics in a modern-day scenario, keeping their soul intact. Initially, my only motive to attend this gig was to watch one of the most under-rated Indian singers and ex-sensation Sagarika Mukherjee (of Shaan-Sagarika fame) perform live. But more on that later.

As the evening grew darker, the intoxicating voices of Anushka Manchanda, Mauli Dave, Sagarika & the newly-found Shalmali Kholgade dissolved my skepticism towards the revamping of the chosen classics – WHICH incidentally, can be an extremely tricky maneuver, since many pasts attempts have gone fatally wrong.

Playback singer & Fear Factor India finalist Mauli Dave kicked off the smoky evening against the backdrop of a Rhys D’Souza’s saxophone with Yeh Samaa Hai, originally from Jab Jab Phool Khile. Personally, she was trying too hard resulting in a slightly lackadaisical performance.

This continued to the next song Jaane Kya Tune Kahi from Pyaasa. Again, I feel she butchered the song. I’m not drawing comparisons to Geeta Dutt – heck! no one can – but it failed to evoke any emotions in me. Though I must admit, despite having a sore throat and a cold, she worked hard on her performance. Nonetheless, both the above songs improved considerably towards the end.

Kaagaz Ke Phool’s Waqt Ne Kiya was up next. The original version, again sung by Geeta Dutt, is beautiful and soulful. Mauli started off well in a comparatively lower pitch, but kind of lost it towards the higher notes. This was her best number till then; in fact, one could sit by a window with a drink and ponder over life with this version.

Her version of Pakeezah’s Chalte Chalte Yun Hi was definitely better. Though her voice was as sweet as honey, what you really took away from this song were the astounding accompaniments in the form of Kishore Sodha’s trumpet and Rhys D’ Souza’s saxophone – that really got me in the mood.

BUT, after hearing her rendition of Aaj Mausam Bada from Loafer, all previous misgivings were forgiven. The entire venue transformed into a fiesta. The audience was applauding her; even Anushka & the saxophonist Rhys D’Souza took the floor with their funky moves as Mauli enamoured everyone with her voice.

Ex-VJ and member of indi-pop girl band, Viva!, Anushka Manchanda stunned everyone with every single performance of hers. She was wild and energetic, uninhibited and dynamic, and as glittery as her dress itself.

She started Yeh Raat Yeh Chandni from Jaal with just the right balance of smokiness, sensuousness and seductiveness. Yes, that’s quite a feat to master. Rhys on saxophone gave her some tough competition with his ‘moves’.

Anushka’s husky voice teased the audience into a daze where it seemed everything would be fine as long as she kept singing Pukarta Chala Hoon Main from Mere Sanam. In terms of a mathematical equation:

How does she manage to repeatedly enthrall her audience? Her version of Ajeeb Dastaan Hai Yeh from Dil Apna Aur Preet Parai was very, VERY different from the original – hers being more reminiscent of a contemporary cabaret. You have this gorgeous, tall-statured diva doing a small jig, and ending it in a power-packed orgasmic jugalbandi with the guitarist, Warren Mendonsa & the saxophonist, Rhys. And although Warren was playing a completely different style of music on red Gibson E335 this time (instead of his usual Black Stratocaster), he continued to charm the audience with his occasional solos and licks.

Watch her go wild in this video:

Indian music industry’s latest entrant, Shalmali Kholgade seems to have a lot working in her favour. Mikey couldn’t stop praising her voice which has grabbed the attention of the likes of A.R. Rahman & Amit Trivedi.

She started off with Tum Jo Mil Gaye from Haste Zakhm. She has a pleasant voice, but she seemed to be trying too hard to play all seductive. Her contemporized version lacked the required subtle but sensual tone.

Nonetheless, she hit the bull’s eye with Aar Paar’s Ja Ja Bewafaa. Now this was more like it. She transformed the originally sad song to a perfectly naughty version. Mikey was right. She was brilliant and definitely someone worth looking forward to.

Flautist Rajeev Raja accompanied Shalmali for Woh Haseen Dard from Hum Saya. Her stunning aalap elevated the evening to a completely new level. Her singing is unconventional with its great grasp on the finer details as well as voice modulation. It reminds me of our colourful singers from yesteryear, as well as with some hints of Rekha Bhardwaj’s style.

Without a single shred of doubt, the extremely underrated artist Sagarika is my all-time favorite indi-pop singer. The Disco Deewane diva performed on stage after a gap of 4 years, and I was fortunate enough to catch her in action and meet her.

Even though she performed only one song, Babuji Dheere Chalna from Aar Paar, it was worth every moment of it. Looking as youthful as ever, she took to the mic with great ease and dazzled the audience with the peppy, vigorous voice she is known for.

Sagarika, we miss you a lot. Please make a GRAND comeback.

Mikey Mccleary himself had a fairly relaxed presence on the stage, adding to the lower ends of the soundscape with his 4-string Ibanez ATK bass, which was tuned to just the right amount of fuziness. Drummer Aditya Ashok was extremely adept at playing along with the rest of the band, hitting the cymbals and toms gracefully, without the slightest trace of showiness. In comparison to his usually dominating performances with Blackstratblues, guitarist Warren Mendonsa was relatively diminished in his stage presence this time, ostensibly because playing with The Bartender called for a different, subtler style altogether. Equipped with a different guitar and a different setup than usual, Warren still played his part well, never once seeming out of place.

Overall, the Bartender’s theme, trying to mimic the dark glamour and swinging style of the 1920’s Prohibition Era would not have been complete without the brass section of the band, with Kishore Sodha and Rhys D’Souza playing the trumpet and the saxophone respectively, and Merlin D’ Souza’s piano, all of whom, towards the very end of the performance, rewarded us with amazing solos.

A special mention for both Kishore & Rhys, who together, were the true performers of the night. Each and every song was beautifully accentuated and Jazz-ed up by the trumpet and saxophone respectively. The night would have been incomplete without them.

Electrifying would probably be an understatement for the astounding finale, which consisted of not one, not two but FOUR back-to-back performances.

Shalmali performed the famous Khoya Khoya Chand from Kala Bazaar which was recently revamped by Mikey himself and performed by Suman Shridhar in the movie Shaitan. Unfortunately, Suman couldn’t be a part of the evening. But I kid you not – the atmosphere changed the moment Shalmali uttered the first words. Undoubtedly, this was her BEST song of the night. Shalmali sure can give a lot of modern-day singers a run for their money with her voice.

By this time, the audience had gone absolutely bonkers in the wake of the fantastic performances presented to them. They refused to accept the end of the gig and demanded repeat performances. Shalmali continued, beautifully as before, with Ja Ja Bewafaa.

Mauli proceeded to bring the show to a stunning climax with an even better rendition of Aaj Mausam Hai Bada. By the end of it, everyone, from the band members to all the singers to the audience, was seen jiving to the melodious sound of the trumpet and saxophone bringing the evening to an astonishing crescendo.

Phew! It was truly as Mikey had proclaimed:  Classic Bollywood – Shaken, Not Stirred – with a new twist, but with the soul left intact.