South Korean rapper Min Yoongi AKA Suga is known, loved and celebrated for the music created and performed by the biggest pop group across the globe. His two mixtapes Agust D and D-2, under his solo moniker Agust D, are also widely recognised and acclaimed.

However, Suga has branched out further, and collaborated with several artists as a producer, composer and rapper. These tracks reveal more of his artistic inclinations, his humane world-view and his ever-expanding ingenuity.

A smooth R&B track released as a digital single by Suran and featuring Changmo, this track is imbued with tinges of electro-pop and beautifully highlights Suran’s velvety vocals. Produced by Suga, the song details the story of a painful lost love, the nostalgia that inevitably accompanies a breakup, and the finer nuances that a lover remembers about their significant other. The track is also co-produced by Slow Rabbit, one of Big Hit’s in-house producers. The clean vocals juxtaposed with painful emotions and Changmo’s pragmatic rap verses makes this track a delight to listen to. In 2017, Wine won a Melon Music Hot Trend Award, making this the first major musical award for Suga outside of BTS.

If there is a musical companion piece to Wine, it would be We don’t talk together. While Wine deals with the hidden nostalgia of a lover who has lost love, We don’t talk together is also a breakup song but in this one, the lovers hold themselves accountable, recount their experiences, reflect on what possibly went wrong and acknowledge their continuing affection for one another. An alt R & B track interspersed with old school hip-hop and trap beats, this song is  co-written by Suga and is one of the finest examples of his artistic repertoire. Korean hip-hop stalwart Giriboy’s melodic rap is the perfect addition to this emotionally honest piece.

In interviews, Suga has often spoken about his musical inspirations Epik High. This song was composed by Tablo of Epik High, and co-written by Suga and Tablo.It debuted at number 2 on the World Digital Song Sales Chart. This also marked the first collaboration between Suga and Korean ballad Singer, Lee Sora.

The sentimental ballad is about hearing the sounds of rain, feeling melancholic, turning on the radio and hoping the DJ will play a song to comfort the listener. Suga’s soft rap is particularly poetic here: “When you’re buried under loneliness/Even when you’re together/When you’re intoxicated with memories/And bring someone up/That’s when I become your music.”

Suga often refers to his older work in his music, and this reference is also reminiscent of his solo, First Love, where he talks about how his first love is music.

After Halsey collaborated with BTS on Boy with Luv, in an interview with Zane Lowe for Apple Music, she stated, “I was looking up lyric translations (of the works of Agust D) and I was blown away. I was like this stuff is so introspective” The content is about mental health and his inner turmoil… and I was just moved.” This led to Suga collaborating with Halsey on Suga’s Interlude, which appeared on her album, Manic.

As artists, both Halsey and Suga do not shy away from documenting their lived experiences with regard to mental health. The introspective song examines the success that both musicians did not think was possible for them, and the ramifications and consequences of that success, especially its impact on their mental health.This is an idea both artists have explored extensively in their individual works.

Produced by Suga, Eternal Sunshine has alt-hip hop trio Tablo, Tukutz and Mithra Jin (Epik High) swapping verses about overcoming anxiety and embracing optimism over relaxed beats. On his podcast,Tablo described Suga as “talented,” “passionate” and someone he “vibes very well” with, creatively.

Eternal Sunshine is a lyrical and creative masterpiece, with its very vulnerable opening lines : “Do you get lonely/ sick with anxiety/can’t trust nobody/ same here.” It is one of two works Suga and Tablo have collaborated on, so far.

After Max featured on Burn it, Suga featured on Blueberry Eyes, a song from Max’s album Colour Vision. While Max’s expression of love is a tribute to his wife, Suga’s love is a subtle nod to ARMY when he raps, “You A-R-E-M-Y” my light/ friends who support each other/ each other’s anchor.”

Eight is Suga’s collaboration with Kpop superstar IU, and the song is a reference to both Suga and IU turning 28 in Korean Age. This pop-rock ballad tells the story of being a young person in their late twenties : their trials, tribulations, stories of struggle, grief, people lost and beautiful memories. As musicians of the same age, it is a unique exploration of their personal selves, their dreams, internal conflicts and emotions that accompany both. 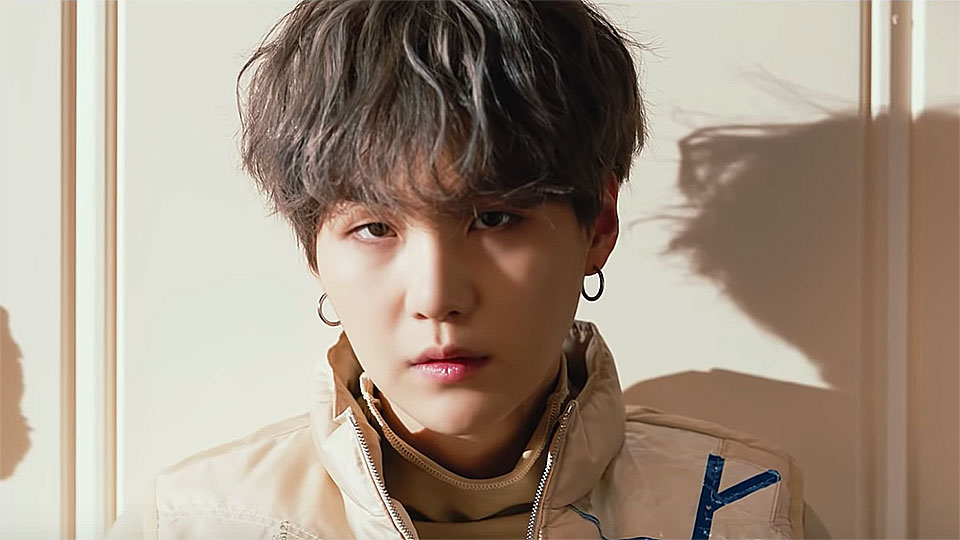