BBC has called them The Beatles of the 21st century and the band in question, Bangtan Boys, or BTS has four major keys to success – emotional resonance, sincerity, an ARMY of fans and kickass music videos. Since the group’s inception, they’ve worked to offer their fans something new while also maintaining the quintessential style that fans have come to love.

Their signature bravura includes inventive choreography, stylish costumes, special effects, and intricate narratives throughout their visual odyssey. It’s safe to say BTS always lives up to the expectations of their fans. They represent a new age of composition, dance, and most importantly visualisation of music with each album as they whip up ground-breaking concepts.

One thing that every fan can vouch for is that they don’t mess around when it comes to their music videos. From one of their very first music videos, “No More Dreams,” to their latest visual piece, “Permission to Dance”, each of the group’s illustrations are stunning, and they inevitably leave the viewer wanting more.

Let’s have a quick run-through across some of their most iconic music videos.

Their first single, “No More Dream,” in 2013 was an ode to teen apathy, a rebellious rejection of Korean traditionalism. In the pre-BTS era, K-pop was dominated by songs about love and relationships. BTS is generally acclaimed for breaking this mould, exploring topics such as bullying, elitism, societal expectations on youth, mental health and social justice via their music. This dark, edgy debut put BTS on the map with a completely different look and style, with remarkable choreography and considerably great production that made it a super hit.

With “Run” in November 2015, the band plunged into the Bangtan Universe. An interwoven ecosystem of content, the Bangtan Universe is a fantasy-infused narrative of seven friends navigating young adulthood. It’s a coming-of-age story in which the seven members of BTS become teenaged characters struggling to make their way in the world.

As new fans start to piece together BTS’ music videos, they begin to realize that many of them connect. The overarching storyline is known as the Bangtan Universe, and it exists not just in BTS’ visuals, but in their webtoons and short stories as well. In short, the BU involves a fictional storyline that has all the BTS members playing their characters. These characters each have their backstory.

“Save Me” from May 2016 was brimming with emotion and sharp choreography. The music video, which was remarkably filmed in a one-shot take, showed BTS members singing and performing intense choreography against the wind, in the backdrop of low-lying clouds. The dance was choreographed by The Quick Style Crew. The video actually ranked second on Billboard’s Most Viewed K-Pop Videos in America as per the May 2016 list revealed by Billboard.

For “Blood Sweat & Tears” the boys went all out on the green screen. Complex choreography that displayed BTS’s exquisite dancing skills combined with the supporting cinematography and SFX made it unrivalled. The storyline of “Blood Sweat & Tears” interpreted the song’s mood by bringing together various biblical, artistic, and literary references.

The artistic elements used to present the implied meaning of “Blood Sweat & Tears” became much more than simply a graceful, well-produced music video–it is an intricate compilation that describes falling from grace and good against evil with complex imagery, open to several interpretations, making it the epitome of art.

The release of Dynamite was one of the most defining moments of summer 2020. It shattered many records and got BTS their well-deserved Grammy nomination. The band made it to give their fans hope and happiness during a time of sorrow and grief, and the music video follows through with that message.

The video is an homage to the 60’s/80’s from their retro disco outfits, to the Michael Jackson tribute and BTS dancing in a record shop and old school diners – all with a colourful modern twist! Pastel colours adorn the video as BTS tries to convince their audience to remember the good amidst the bad.

When it comes to K-pop’s evolution locally and globally, BTS is in the driver’s seat! They keep setting the bar higher with material that’s both friendly to pop and enthrallingly artistic. Their MVs, just like their music, transcend the K-pop genre and demonstrate BTS’s broad international impact.

One can rightfully call them a hit-generator and the band of boys in question have opened the flood-gates to music videos that are a visual tapestry of whimsical grandeur combined with complex, energetic choreography. 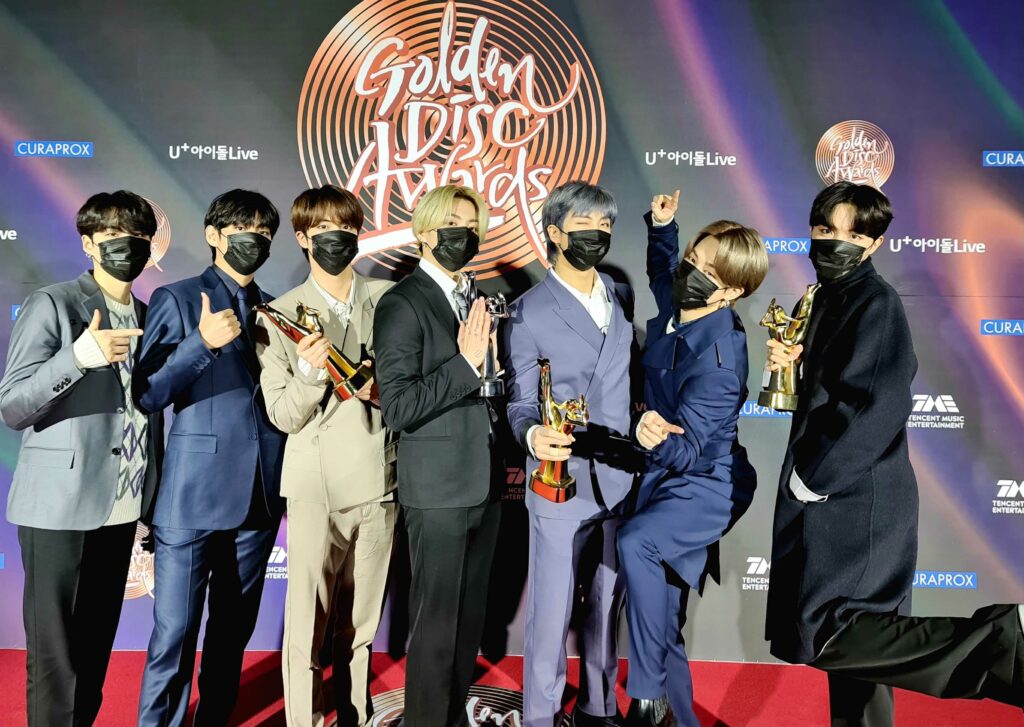