1. Viriboni Varnam- Raaga Bhairavi- Ata Taalam-Pacchi Miriyam Adi Appayya: This varnam set in the complex 14-beat cycle of Ata Taalam can be a nightmare for students to learn but once the composition is mastered, the beauty of it starts getting to us. The amazing nuances of a bhaashanga raaga like Bhairavi are greatly included in the composition. For any student who wants to study Bhairavi as a raaga and learn the raagalapana, Viriboni would be the first challenge to take up!

2.  Chakkani Raaga Maargam– Raaga Kharaharapriya- Adi Taalam- Saint Thyagaraja: The legendary composer is famous for being an ardent devotee of lord Rama but this composition speaks about the path which humans should lead and demarcates between the royal highway to rugged streets! The lyrical brilliance makes the listener rethink about perspectives of life and the suave nature of full scale raaga Kharaharapriya is effortlessly blended in the composition.

3.  Vaatapi Ganapathim Bhaje– Raaga Hamsadhwani- Adi Taalam- Mt. Dikshitar: Ganapathi is the deity of removing obstacles and Vaatapi Ganapathim speaks about the grandeur of the deity in the town Vatapi. There must have been thousands of concerts that begin with this auspicious composition and though heavily adapted in film versions and stage, dance plays- the sanctity of the composition remains intact.

4.  Hiranmayeem Lakshmi – Raaga Lalitha- Rupakam- Mt.Dikshitar: Written from an extreme introspective state of mind when the composer had to choose between materialistic riches or eternal enlightenment- Hiranmayeem is a pained yet thought provoking composition that does look like hailing the goddess but speaks about choices in life. The composition is surely aimed to bring tears of ecstasy for the subtleties of Lalitha Raagam and the painful plea of the composer to the deity.

5. Bhairavi Swarajathi– Kamakshi- Misha Chapu- Syama Sastry: Known for being as complex as an advanced kriti, this swarajathi is a delight to hear. Another important aspect of this swarajathi is , every charanam escalates one note each from the first shadjam till the top shadjam of the Bhairavi scale. The finale with Syama Krishna Sahodari will give goosebumps no matter how many times one might have heard it.

6. Maanasa Sancharare– Raaga Saama- Adi Taalam- Mysore Vasudevachari: As people say quality matters more than quantity, Mysore Vasudevachari is a perfect example. In comparison to the musical trinity, the number of compositions written by him are quite less. But this composition is like a lilting lullaby that can put even the most active person to a peaceful slumber.

7. Raghuvamsa Sudhambudhi– Raaga Kadanakutuhalam- Adi Taalam- Patnam Subramanyam Iyer: Often misunderstood as a composition of Thyagaraja, Raghuvamsa is indeed composer by Thyagaraja’s one of the prime disciples Shri Patnam Subrahmanyam Iyer. But the style of lyrics, the scale’s progress and the usage of words shows the influence of his teacher on his composing! No matter how many vocal/instrumental/ film/private versions come of this eternal number, the composition is timeless masterpiece. 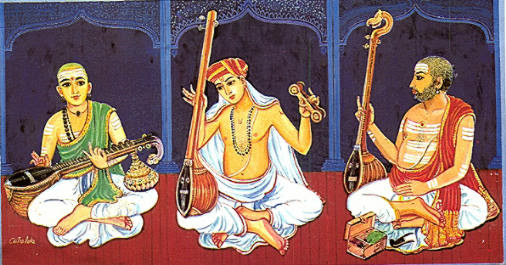